Did the Democratic and Republican Parties switch platforms? Many people seem to think so. What’s the reality behind that? Did the party ideology switch? Did the party platforms switch? The reality is is that the republicans and democrats did not switch. The history of the is much more complicated.

The Republican Party Was Founded to Halt Slavery

Before you talk about whether the republicans and democrats switched platforms, you must understand their early positions. The Republican Party formed in 1854 in Exeter, New Hampshire. The Republican Party’s main purpose was to stop or halt the expansion of slavery in the United States. 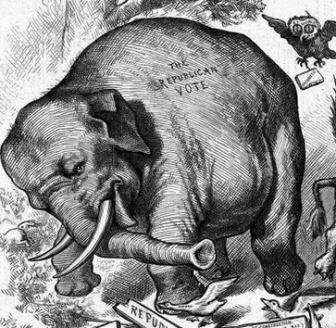 During the 1860s, Republicans dominated the Northern states. They planned an ambitious expansion of federal power, helping to fund the transcontinental railroad, the state university system and the settlement of the West by homesteaders, and instating a national currency and protective tariff. Democrats, who dominated the South, opposed these measures. Alexander Hamilton would be very proud. After the Civil War, Republicans passed laws that granted additional protections for African Americans. Southern Democrats largely opposed these expansions of power.

Then in the early 1900s, the Democratic party adopted the expanding progressivism and socialism of European countries. In the 1930s, Democratic president Franklin Roosevelt won reelection on the strength of the New Deal, a set of Depression-prolonging reforms. Roosevelt won in a landslide against Republican Alf Landon, who opposed these massive expansions of federal power. So, the Democratic Party quickly became the party of big government.

Republicans Change Their Minds… But Did They Switch Platforms?

But Republicans didn’t immediately favor limited government. “Instead, for a couple of decades, both parties are promising an augmented federal government[.]” Rauchway wrote in a 2010 blog post for the Chronicles of Higher Education. Republican rhetoric drifted to a small-government platform cemented in the 1930s with its opposition to the New Deal.

But why did Democrats start advocating for big government? According to Rauchway, both parties were trying to win the new Western states. The admission of new western states to the union in the post-Civil War era created a new voting bloc. Both parties competed for them to control Washington D.C.

Democrats thought they figured out a strategy. Republican federal expansions in the 1860-70s favored big businesses in the Northeast, such as banks, railroads and manufacturers. Yet small-time farmers who had gone to the West received very little.

Both parties tried to exploit this frustration, by promising the little guy some of the federal monies. Democrats stuck with this stance — favoring federally funded social programs and benefits — while Republicans were gradually driven to the opposing position of smaller, hands-off government.

The Parties Did Not Switch Platforms

From a business perspective, Rauchway pointed out, the loyalties of the parties did not really switch. “Although the rhetoric and to a degree the policies of the parties do switch places,” he wrote, “their core supporters don’t — which is to say, the Republicans remain, throughout, the party of bigger businesses; it’s just that in the earlier era bigger businesses want bigger government and in the later era they don’t.”

In other words, businesses needed things that a bigger government could provide, such as infrastructure. Once these things were in place, a small, hands-off government became better for business. The parties did not switch in the 1960s either. The changes started decades earlier.

What to read next

Get the best viral stories straight into your inbox!

Back to Top
Close
Go to mobile version

Send this to a friend